How Does Moly Grease Work?

How Does Moly Grease Work? 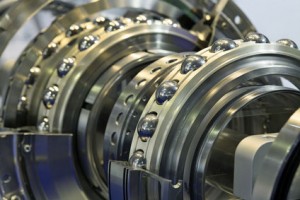 Grease can be thought of in terms of paint in that there are a variety of formulations that are used in various applications. You could apply latex paint to the hull of your boat and it would look very nice, however, it would not last very long once your ship went to sea, and vice versa. The paint that you would use for your boat, although quite effective, would not look very good when applied to the walls of your home. Moly grease is a special formulation that is used in situations where metal slides against mental under high pressure and is generally used on pinion gears and splines.

This silvery black solid compound, which naturally occurs as the mineral molybdenite, is classified as a metal dichalcogenide. The compound is not affected by oxygen or dilute acids. It looks and feels similar to graphite. Because it is so robust and features low friction properties, it is often used as a solid lubricant.

Sliding surfaces, such as axles, require different types of grease and black moly grease is used whenever the services in question are under great pressure. In most cases, you will use whatever type of grease is called for in the service manual. For anything that requires grease, there will be a symbol that resembles a grease gun and has one of the following:

GREASE - Multi-purpose, grease that is lithium-based

The different types of greases are not interchangeable. For instance, using general-purpose grease on a drive spline can end up in disaster, due to the pressures involved. On the other hand, moly grease would not work well on an axle due to the fact that it is very slick.

Several different molecules make up the hexagonal crystal platelets of moly. There is one molybdenum atom and two sulfur atoms in each molecule of moly. What makes moly platelets special is their affinity to metal surfaces. The combination of this affinity, especially when considering how moving parts, when sliding around, can cause the thermochemical reaction that is required for moly to provide its armor-like overlapping coating of protection to engine parts.

Moly platelets have the characteristic of being able to slide across engine surfaces quite easily. This allows metal to rub against metal while being protected by the lubricating properties of moly grease. 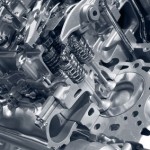 There are microscopic pores on the surface of all engine parts and the thick gooey moly grease fills in these pores nicely, making the surface much more smooth. Nothing works better to provide a good seal on a combustion chamber.

Generally speaking, if the service manual calls for moly grease than that is what you need to use. It is recommended for shock loading and bearings that are subject to especially heavy loads such as those that are found in CV joints and universal joints. Conversely, problems can be experienced if this type of grease is ever used in parts such as high-speed bearings.